Clicking on the photo above will take you to the ordering information for our beautiful, festive and unique Merry Christmas slate plaque. This lovely Christmas sign is especially great if you will be hosting a Christmas party, dinner, or any type of holiday get together. The powerful message is sure to resonate with anyone who enters your home. Always remember, It’s a Wonderful Life.

Here’s an informative movie review of the Christmas classic, “It’s a Wonderful Life.” 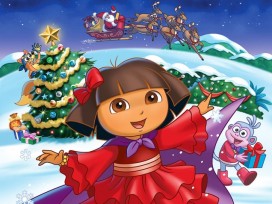 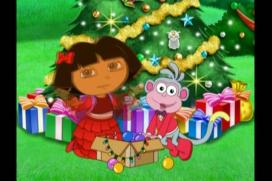 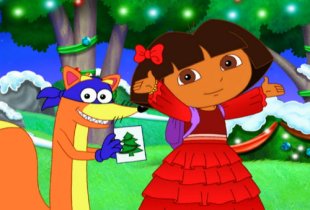 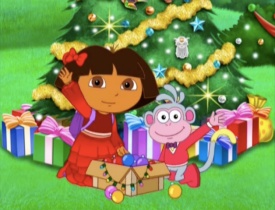 If you have a little adventurous explorer in your life who loves Dora, then you’ll want to check out my other post where I share some Dora-themed Christmas gift ideas found on Pinterest.

They are cute little buttons with sweet feet. Everything is just so precious and perfect about babies. A simple button, bow, plus sign, tummy, or footprint takes on a completely new and magical meaning when it comes to babies.

When it comes to baby showers and other celebrations, there are some tiny footprints designs that make sweet treats for everyone to eat. 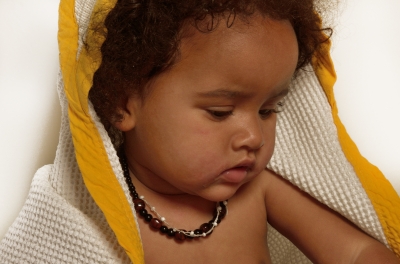 This past week on my Bella Blog I talked about creative baby shower ideas found on Pinterest.  Parents obviously need an abundance of diapers. There are some very artistic and clever ways to present the parents with a bundle of diapers during a baby shower: Six Super-Creative Baby Shower Diaper Cakes.

Common at any baby shower, birthday party or other celebrations is having a variety of delicious fruit for guests to enjoy. I found some extraordinary fruit displays that are wonderful for any baby shower or celebration: watermelon carvings, fruit baskets, fruit in a mini-bassinette, fruit in ice cream cones, a garden fruit display, and fruit in plastic or decorative cups and placed on a cup cake stand. Also, there are ideas on how to use children’s books to create a fruit display that centers around a particular book.

I am in somewhat of a rush. Miss Megan and I are supposed to be heading ‘over thr bridge’ to spin a night with 5 of her cousins. She always has such a blast! I’m sure that it will be a chore to get them to sleep as usual. Looking forward to a great weekend! Please visit my Bella Blog & like post over there. Sign up for the Newsletters. Great things are to come. Enjoy your weekend!

Doesn’t Spring know how much we love and miss her? It has thankfully warmed up a lot, but last Friday was so gray, colorless, windy, gloomy and cold. Hopefully we won’t see another one of those days for a few months.

The weather is much more pleasant than what it has been previously, but it’s still fluctutates so much; and it’s a day-by-day thing trying to decide how to dress my baby for the day. Don’t get me wrong, we have brutal summers here on the Gulf Coast so I am in no hurry for that type of dangerous and miserably hot weather. Spring (and Autumn), already usually very very short, is usually the best time of year for outdoor activities.

Time is really zooming by. Looks like it has been 5 months since I’ve posted here. Well a 5-month gap isn’t too bad (lol). I’ve been super-busy with so many things. Who isn’t super-busy these days? I really do long for simpler times.

For my daughter’s first birthday, I made this post: My Baby is One Years Old

So what I am using my business blog for is to not only post gift ideas, baby shower ideas and birthday party ideas, but to also provide the information where various gifts and products can be purchased.

(These photos below are courtesy of a partner site)

So for anyone looking for (butterfly-themed) birthday party ideas, this post on my other blog gives a great place to start and shows you where the party decorations above can be purchased.

Looking for a unique birthday gift for someone born in October, born on October 17th or someone who is a poetry lover? Consider combining the person’s birthday month with their interests and give them a birthday gift rooted in history and inspiration.

Jupiter Hammon was born on October 17 in 1711 and became the first black writer to be published in the present-day United States. Additional poems and sermons were also published. Hammon was born into slavery and was never emancipated. He was a  devout Christian, and is considered one of the founders of African American literature. (wikipedia)

Click here for some birthday gift ideas relating to literature.

The Gift of Nature: Sunsets

The title of this nature photograph comes from Psalm 23…..”He leads me beside the still waters.”

Click here to listen to this inspirational, powerful and beautiful song. “Black Butterfly” was released in 1984 and is sung by Deniece Williams. She has the voice of an angel. I like to interpret this song as being a dedication from a parent to their child, or little angel.

I will often post a “Song of the Day” and then later post gift ideas relating to this song of the day.

Morning light, silken dream to flight
As the darkness gave way to dawn
You’ve survived, now your moment has arrived
Now your dream has finally been born

Chorus:
Black Butterfly, sailed across the waters
tell your sons and daughters
what the struggle brings
Black Butterfly, set the skies on fire
rise up even higher
so the ageless winds of time can catch your wings

While you slept, the promise was unkept
But your faith was as sure as the stars
Now you’re free, and the world has come to see
Just how proud and beautiful you are

This is my favorite and most moving scripture, and one I certainly need to read and meditate on every day.

The Lord is My Shepard

A psalm of David.

The Lord is my shepherd, I shall not want.
He makes me lie down in green pastures,
he leads me besides the still waters,
he restores my soul.
He guides me along the right paths
for his name’s sake.
Even though I walk
through the valley of the shadow of death,
I will fear no evil,
for you are with me;
your rod and your staff,
they comfort me.

You prepare a table before me
in the presence of my enemies.
You anoint my head with oil;
my cup overflows.
Surely goodness and mercy will follow me
all the days of my life,
and I will dwell in the house of the Lord
forever.

The pier is Megan’s and my hangout spot. Dad comes along sometimes, but he is not as much of a nature lover like Megan and me. A few times we have been able to go early in the morning. The air feels different early in the morning, and it’s so refreshing and a great way to start the day.

I’ve learned that it’s best to take the stroller along. When she first started walking, she was okay with holding my hand and letting me lead the way. Now that she’s gone through some growth spurts, she’s become so much more independent and adventurous.

Just being out isn’t enough for her anymore. She wants to truly interact with the environment and her surroundings. One morning when we went to the pier, she kept pulling her hand away from mine, and she’d take off running away from me. We’d go to the beach area and she really thought it was okay to just walk straight into the Bay.

If you see a tiny 5’2″ mama with a pink polka dot diaper bag chasing a gorgeous little 1-year-old….that would be Megan and me. 🙂 Sometimes I’m like, “I have become one of those parents I used to always look at and say–“Woops, their baby is wilding out.” LOL.

We both really have a great time though. And so many people are always smiling and speaking to her, no matter where we go, she brings  smiles to so many people’s faces.

Friday night at the pier was smooth sailing. A great outing.

I usually don’t carry my DSLR with me anymore. It’s just too big and gets in the way now that I have so much mommy and baby stuff to do. I debated whether I should take it and said, “Well you never know when it comes to nature, there may be some good shots to take.”

It’s always a lot of people fishing and they take it seriously; boy I tell they concentrate hard, lol. But I’ve never seen so many people, about 25, gathered in one spot and looking in the water.

So I thought I’d just stand and look too. I was trying to see who looked kind enough for me to ask what’s going on, but then I saw this scene: 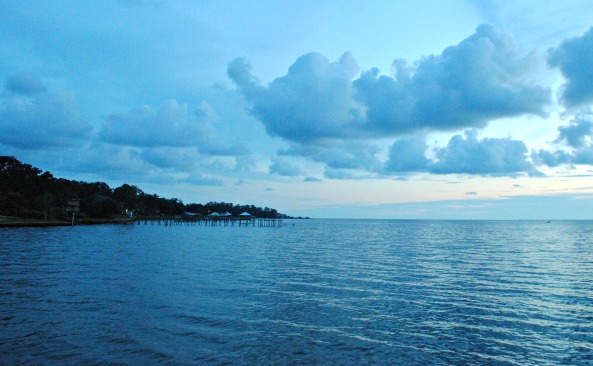 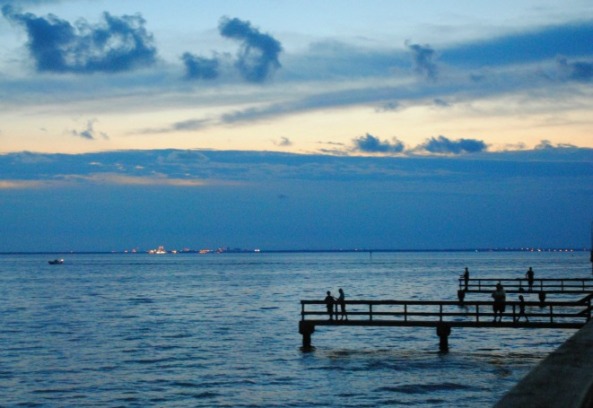 I later found out that everyone was looking at a man standing on the rocks fishing. He had been struggling with a fish for quite a while. Someone told me that when it takes that long to pull in a fish, it means it’s a big fish and people have to tire the fish out  in order to pull it in.

I don’t know anything about fishing, but learned something that night. Sure enough he pulled out a fish about as long as a toddler. Everybody started clapping, and Megan was ready to continue her breezy Friday night stroller ride.

I’m dedicating this song to my husband.

I remember being a little girl and, during those nice family nights, mom and dad sometimes would both be in a great mood and they’d start dancing to songs that reminded them of their teenage-love years. (They’ve been together since they were 16 years-old.) Of course, my sisters and I would laugh; but it was so comforting to see mom and dad smiling, dancing, showing how much they love each other, and reminiscing over their teenage years.

One day when Megan is older, she’s going to be in the spot I was and be that little girl smiling and laughing as her parents dance to a love song.